Zhanna Sivchuk
00:10 10 Apr 18
I dropped my old attorney and came to Mike. I had 2 matters that needed to be resolved together. My previous attorney was only working on one matter since he was not knowledgeable in the other, my case was going no where. Finally after 6 years i dropped my old attorney and came to Mike. He was able to take care of both matters in fraction of the time and cost than with my previous attorney. Michael and his team are very knowledgeable in many diverse legal areas. I am very happy i switched attorneys and both of my cases were resolved and finalized.
See All Reviews
Thursday, Dec 24, 2015 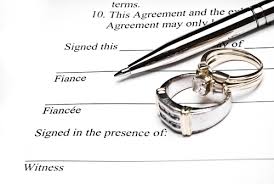 Prenup agreements garner a good deal of attention in the media as well as in films and on television. A great deal of the information floating about regarding prenuptial agreements is factually and legally incorrect.

A good deal of confusion stems from what a prenup can and cannot do when it comes to the provisions of the agreement itself. Before considering entering into a prenuptial agreement, it is important to understand what can and cannot be done with this type of contract.

Limits exist on what a prenup can do in regard to the custody of children that are yet to born. In other words, a child custody agreement cannot address custody issues pertaining to children that may be born during the course of an impending, future marriage.

Other limitations exist regarding what can be included in a prenup based on public policy. As a matter of public policy, a contract cannot be crafted that promotes divorce.

This prohibition does present a variety of gray areas in regard to what permissibly can be included in a prenuptial agreement. For example, a prenuptial agreement that provides bountiful benefits in the event a party to the agreement files for divorce because the other spouse has an affair might be unenforceable as being a contract promoting divorce. In the end, ascertaining whether a prenup promotes divorce is determined on a case by case basis.

A skilled attorney can assist a person in deciding whether a prenup is necessary. A lawyer typically schedules an initial consultation to discuss this type of issue with a prospective client at no charge.