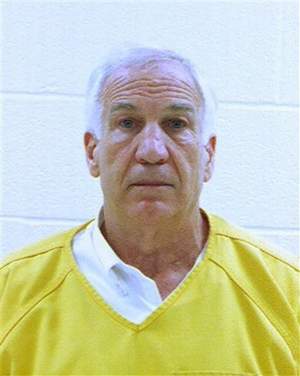 Sentenced to 30 years of imprisonment last Tuesday, Oct. 9, 2012, the former Assistant football coach of   Penn State University, Jerry Sandusky, now 68 was moved to State Correctional Institution at Camp Hill to serve his sentence for the rest of his life. The lawyer of one of the victims said, he may have started his pedophiliac earlier than 1987 and probably had victimized a hundred minor boys. He represented one of Sandusky’s victims now age 40 who claimed he was sexually abused by Sandusky when he was 16.

Sandusky was arrested in November 2011 and convicted in June, this year on 43 out of 45 counts of child sex abuse. The acts were discovered to have committed against minor boys age 10 to over 15, where at some point, committed while inside the Penn State athletic facilities or in his residence. Victim No. 1 finally spilled the beans and came out revealing himself. Aaron Fisher recalled his disheartening encounter   with Sandusky in his book, “Silent No More: Victim 1′s Fight for Justice against Jerry Sandusky.”

Worst, the collateral damage is even more. Penn State is now facing four civil lawsuits and probably other cases more to come. NCAA penalized Penn State of about $60 million. The university football team is also barred to participate in the postseason play for four years and cut the number of scholarships.

This also ruined the professional career of Head Coach, Joe Paterno who held the record of the longest football coach with the greatest number of team wins. He was stripped of his awards and 14 years of victories. Two other university administrators will face trial in January for failure to report suspicions about Sandusky and lying to the grand jury during the investigation.

Despite the conviction, Sandusky maintains his innocence of the child sex abuse charges said, “In my heart I did not do these alleged disgusting acts.” There was no apology from him. However, mental health experts said, this is only natural for sex offenders to avoid taking responsibility because they’re in psychological denial. Now, the victims who bravely faced the molester finally had their long awaited justice.

Now, with this highly sensationalized Sandusky case, the Pennsylvania Bar Association hoped to end up the fear and feeling of uncertainty by the victims of sexual abuse and have the courage to come to the open and prosecute their molesters.  The Association launched a public education campaign to educate the people on the proper way of reporting child sex abuse.

Under the Pennsylvania Protective Services law (§ 3490.11), a person who has knowledge of abuses committed on children have that obligation to report to Childline or a county agency. Likewise, any person who has knowledge of abuses by school personnel against children must report to the school administrator.  A person under the jurisdiction of the Department’s Bureau of Professional and Occupational Affairs has that responsibility to report child sex abuse to authorities. Failure to do so is a violation considered as a summary offense for the first violation, misdemeanor of the third degree for the second or subsequent violation and payment of fines.